Virginia crossover thrash band ENFORCED is fresh off their spring run with Iron Reagan, Sacred Reich and Leeway, and are preparing to release their first full-length album this July. Before their set at Reggies Rock Club in Chicago on May 15, vocalist Knox Colby talked about the band’s most recent tour, his lyrical influences, and the Virginia Beach hardcore scene. You can read an excerpt of the Q&A below, or find the full interview by Nikki Roberts on No Echo next week.

So you guys are back in Chicago for the first time since last fall with Terror at Subterranean. How was that show?

It was a little dicey but I think we did pretty well. That was actually the first time we decided to all wear ear plugs and that was a really bad idea. We never have, and our ears were ringing so we all played with ear plugs at that show and I don’t think we played as good as we could have. Mid-show, we took them out. Forget it. I’d rather go deaf.

Do you have any expectations for tonight?

No. This tour’s been great. The tour’s been fantastic, but in terms of expectations, there’s none, really.  For the most part at all of the shows we’ve played, no one knows who we are so we’re making a lot of fans in the first three songs. We’ve been asked to give a couple encores. 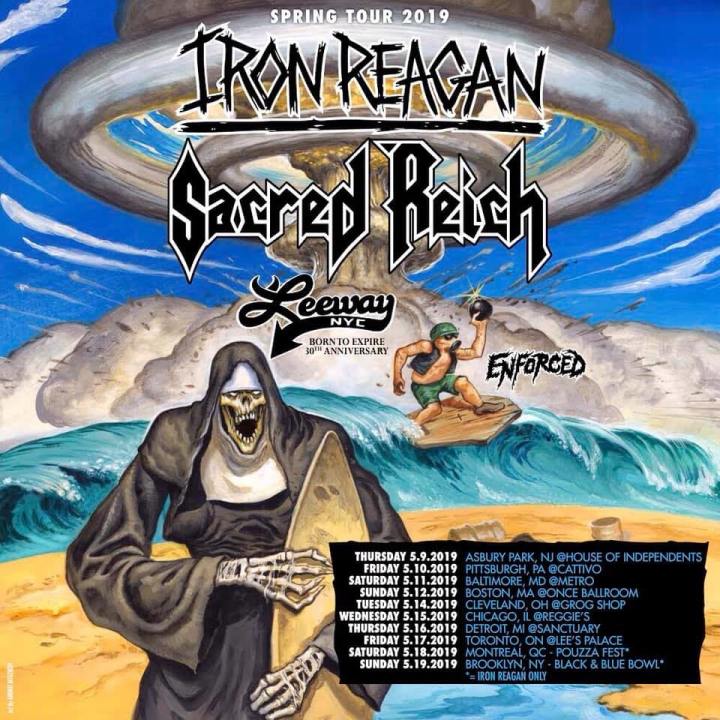 What’s it been like touring alongside Iron Reagan, Sacred Reich and Leeway?

Oh, awesome. Iron Reagan is from the same town that we are, so we’re homies with them. We’ve never gotten the opportunity to tour and get stuck in the van with them, per se, so we’ve all gotten a lot of closer. Sacred Reich is a bunch of fucking angels. They’re great guys; same with Leeway. Everyone is fucking fantastic.

Let’s talk about your upcoming album, At the Walls. Do you have a release date yet?

And this LP will include all the songs from your previous EP, RETALIATION, and demo. Any new songs?

There’s two new songs. All the songs from the demo and the EP got remixed and remastered by Arthur Rizk, who’s done Power Trip, Magic Circle. We sent him all the old masters and he made everything sound just like the new tracks. So it all sounds completely different than it used to.

If someone had never heard of Enforced, how would you describe your sound to them?

It sounds like Sepultura meets Metal Church meets, just for the energy of it, meets Hatebreed. I’m going all over the place, but mix those three up in a nasty metal stew and I would hope to god, that’s what you’ve got. I’ve been asked that before and I always fuck it up.

Who are your personal influences both lyrically and musically?

I honestly can’t speak for musically, because I don’t touch that. Lyrically, it’s kind of all over the place. Joseph Campbell, who I guess in layman’s [terms] you would call a historian. He was really big in the 1940’s to the 70’s I want to say. He was a human philosopher. It’s very humanistic and a lot of my lyrics are about basic instincts or the big picture rather than a specific situation. I may take the specific situation and make it about looking at the big picture…

I’m originally from the Virginia Beach hardcore community. We’re ending [tour] there with Semtex, Flatline, Bato, and this band Copperhead that I’ve helped work with in terms of production. In my head, that’s a stacked show. I cannot wait. I think it’s either Copperhead’s first or second show. I haven’t seen them live…

Section breaks indicate that content has been omitted for the sake of this excerpt. Read the full interview on No Echo next week.