I’ve been reminiscing about summer DIY shows lately. Do you remember those? The ones where you could go crazy in the pit because you didn’t have three layers of hoodies weighing you down. Those shows you could walk to with your friends while enjoying the sun instead of waiting 15 minutes for the bus as the city’s brutal wind whips your face.

When I think about hanging out in sunlit yards and getting ridiculously sweaty and smearing my eyeliner in some of the best mosh pits, in comparison, it’s hard to get excited about indoor winter shows (and yes, shows that occur while it’s snowing in April still count as “winter” shows).

But seeing Burdened and XEUTHANIZEDX at the Archer Ballroom this past weekend renewed my love for bitter cold DIY shows. That includes the ones where you can’t show off your favorite band’s newest merch because you have to keep your winter jacket on, despite being in a space packed full of sweaty punks.

When I arrived at one of Bridgeport’s newest DIY spots for the first time last Saturday night, I was not anticipating the expansive, hardwood studio that greeted me. The space’s high, wooden rafter ceiling carries your eye upwards where it comes to rest on a circular frame that, at some point in time, must have held a chandelier.

The energy at this show was unparalleled to any of the shows I’ve attended this winter, with the exception of when Burdened, XEUTHANIZEDX, Death of Self, Decline and Black Mass played La Bodega’s debut DIY show, the 606 Hardcore Showcase, back in January.

Normally when there’s out-of-town bands or groups I’ve never seen before on a lineup, I try to listen to their music in advance so I have an idea of what to expect. I knew local Chicago hardcore groups Burdened and XEUTHANIZEDX would blow out some eardrums and cause folks to start throwing punches, but I hadn’t had time to listen to Pryss from Springfield, IL; Reduced to Instinct from Bloomington, IL; or Illinois residents SPEAK prior to seeing them live.

Man, was I in for a treat. Not only did Burdened and XEUTHANIZEDX rock their sets, but all of the out-of-towners brought an insane amount of energy to the stage. Despite freezing temperatures, people are still flocking to see their favorite local bands. Despite not being familiar with new groups, Chicago locals still went just as hard and showed just as much love for the central Illinois bands as they would a band from the city.

You made a grave error if you missed this show. Check out the video footage from Burdened’s set at the Archer Ballroom if you don’t believe me.

With sub-zero spring weather, we’re still a considerable distance away from those summer backyard shows we’ve been craving all winter. However, that doesn’t mean there’s nothing going between now and June. While you wonder if Chicago may ever see the summer sun again, check out Locals Only‘s April picks for the city’s best metal, punk, hardcore and indie rock shows. 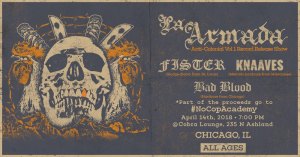 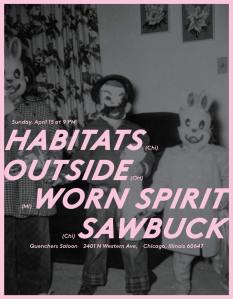 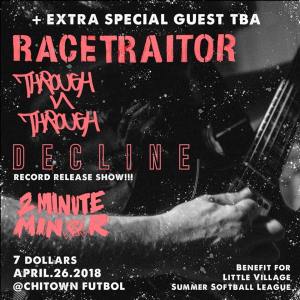 It's finally summer! Which of these June shows will you be attending? Check the link in our bio for more info on these 5 killer lineups! #summer #chicago #hardcore #punk #punkshows #flyers
Our latest Q&A with @bovicehc is live on the blog! Click on the link in our bio to learn about Chicago's newest beatdown band, as well as where you can catch them live next month! #beatdown #hardcore #interview #chicago #blog
Excited to have members of Evil Empire in the studio on Monday! They'll be releasing new music, so be sure to tune in right at 3 p.m! Photo by @leap_photography