Skip to content
I couldn’t be more pumped to see Wavves at the Bottom Lounge with Post Animal this coming Tuesday night. To add to the excitement of what I’m sure will be an incredible show, the band released their sixth album, You’re Welcome, on Friday, May 19th. 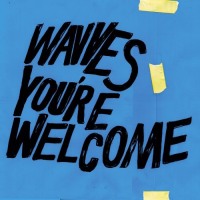 Overall Rating: B++
Wavves is a rarity to me in the sense that every album they put out trumps their previous release, both musically and lyrically. You’re Welcome is a compilation of 12 songs that prove Wavves’s growing musical maturity. Additionally, this is definitely my favorite Wavves album lyrically.
Personal Favorite: “Animal”
Artwork Rating: C+
While I’m a fan of the color scheme (especially since it means the record is being released on blue vinyl), I’ve come to expect killer artwork from Wavves, so bold text on a solid background was more than just a bit of a disappointment. You’re Welcome is easily the worst album cover of the band’s six full length releases. Hopefully any promotional artwork from this tour will be redeeming for this flop.
Average Song Rating (out of 10): 7.5
Daisy: 8.5
It’s easy to see why this song was chosen as both the opening track and the first single released off You’re Welcome. “Daisy” sets the tone for the entire album and demonstrates Wavves’s increasing musical maturity that is displayed in the following 11 tracks.
You’re Welcome: 6.5
The title track of the album draws in listeners with classic, catchy Wavves hooks. However, I feel like “You’re Welcome” is one of the weaker songs on the album due to its simple structure and lyrical redundancy. My favorite part of the song are the opening lyrics, “sand trap, heart attack, pulling on a cigarette // low life, your life, sharper than a hunting knife.”
No Shade: 7
“No Shade” is reminiscent of something that easily could have fit in on V, the band’s fifth full length album. What sets it apart is its complex musical rhythms. Well- complex for a Wavves song.
Million Enemies: 8
The third single released prior to the album’s release date, this song took a while to grow on me. However, its thick distortion and diving bass line eventually won it a spot as one of my top songs on the album. Additionally, Nathan’s ability to poke fun at the band’s redundant song structures (“Another identical verse…”) is admirable.
Hollowed Out: 7
“Hollowed Out” showcases more vocal variety than Wavves has demonstrated in the past. This track is also one of my favorite tracks lyrically on You’re Welcome. Plus, who can resist the band’s trademark “weehoos”?
Come to the Valley: 7.5
Simplistic and catchy with two distinct, repetitive sections, this track reinforces Wavves’s image as a poppy surf rock band. Crack open a couple of brews and get situated on the beach for this one.
Animal: 9
“Animal” wins it all for me. By far my favorite track on the album, this song features my favorite lyrics from You’re Welcome, “the whole world covered in gasoline and burnin’ alive // I feel taken advantage of and empty inside.” Contrary to these lyrics, the song isn’t a total bummer-
Stupid in Love: 6
To me, “Stupid in Love” is the weak track of the album. What saves its rating is a fantastic, building chorus, which I will be screaming my voice out to on Tuesday night.
Exercise: 6.5
“Exercise” makes me a bit nostalgic for King of the Beach, the band’s first??? full length release. Its fast pace, thinner vocals and sudden key changes are a throwback to the band’s earlier days.
Under: 7.5
Beginning with an electronic beat, “Under” is a distinct indicator of Wavves’s changing style musical direction. As a long time fan, it’s exciting to see the band experimenting and growing more mature with the way they approach their craft.
Dreams of Grandeur: 8
“Dreams of Grandeur” is yet another reason that You’re Welcome is my favorite album in the band’s discography regarding lyrical content.
I Love You: 9
Wavves definitely nailed their opening and closing tracks on You’re Welcome. A ballad of unrequited love, “I Love You”’s guitar is the sexiest thing on this album and an excellent ending the band’s sixth release.

If you have yet to listen to You’re Welcome, check it out below: